The average U.S. household has five remote controls. In fact, many households have 10 or more. But despite being introduced over 50 years ago, TV remote controls still maintain a basic design that can be frustrating to use.

Below are the top three reasons why TV remote controls are frustrating to use:

#2 – Too many rarely used buttons getting in the way. Most remotes have from 40 to 60 buttons, yet only about 10 of them are commonly used. All of these extra buttons make it difficult to find the buttons that are actually used most often. This, too, is especially problematic in low light.

#1 – Difficult to use in low light, impossible to use in the dark. Nearly 90 percent of remote controls do not have backlighting. Considering the popularity of watching television with the lights off, along with the fact that 75 percent of Americans have vision problems, it is surprising so few are backlit. Backlighting is not a perfect solution, though, because it only illuminates the buttons but not the text next to the buttons.

One option is to replace your problem remote(s) with a universal remote. Assuming, of course, you can even find a universal remote that doesn’t have these same problems. Most people are reluctant to buy universals because they are awkward to use and require programming. 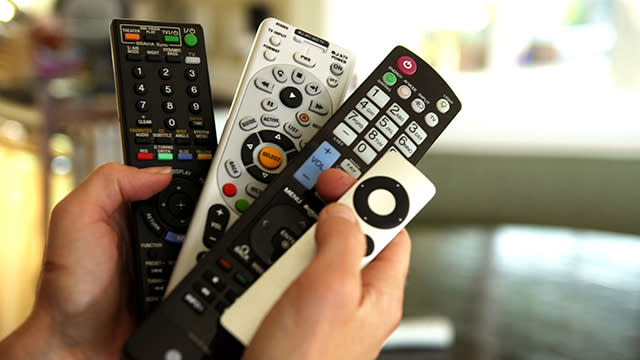 A new option is something called Pop-up Microlites. They are miniature lights that stick on nearly any remote control to illuminate the buttons and text. Unlike backlighting, they illuminate the entire remote control making, it much easier to use in the dark. The real beauty of Pop-up Microlites though is that they can be added to your existing remotes. They are infinitely easier to learn to operate than a new universal. These ingenious little lights are a huge convenience, especially for people with less than perfect vision, or people who enjoy watching television or movies in the dark. They are easy for anyone of any age to use and seem especially ideal for baby boomers.